Dr. Majd’s book outlines the huge loss of civilian life in iran during World War One and after as a result of British, Russian and Ottoman military, political and economic interference. 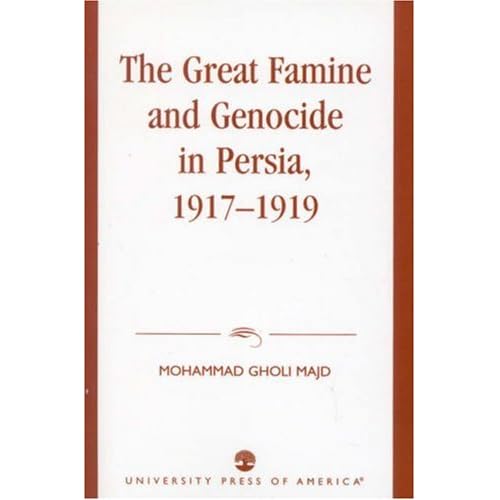 Below are excerpt of a highly informative review posted at Amazon:

One of the little known calamities of World War One, and one which I only strayed across account of fairly recently, where I read a mention of between 9-11 million Persians (approximately half the then population of Persia) dying, was the widespread famine that hit Persian (Iran) at the end of World War One. Apart from the odd mention in other books and articles, the only significant study of this event is this book by Mohammad Gholi Majd.

Before looking at the book, a brief history lesson is probably in order: The history of the Middle East in the First World War is extremely complex. What can be described as the first phase, from November 1914 lasting until the end of 1915, marks a period in which Britain, Russia and Turkey violated Persia’s proclaimed neutrality. In short, Britain, France and Russia made a pact for a new division of Middle Eastern properties, and the Persians, with the aid of Germany and Turkey, made a valiant attempt to drive out these foreign forces.

The second phase was from the beginning of 1916 until March 1917. During this time, the British and the Russians again invaded Persia, and successfully drove out the Turks and defeated the Persian Army. The British were driven in this by the perceived threat to India, then a major component of the British Empire. With the advent of the Sykes-Picot Agreement, the Middle East was partitioned into British, French and Russian spheres of influence. Britain extended her control over the rest of the southern and eastern regions, and eventually captured Baghdad in March 1917. At this time, the war began to extract a toll on civilians. Widespread famine began to devastate the local populations in Persia in early 1917. Local crops withered and the import of foodstuffs from India, Mesopotamia and the United States became nonexistent, due to the use of the local transportation means for war supplies by both sides. The author, Dr. Mohammad Gholi Majd, has a Ph.D from Cornell University, lives in the United States and has written a number of books and articles on Iraq and Iran. Some of these include:

In addition, the Allies refused to pay for local oil, which greatly aggravated the conditions brought on by the drought and famine. Between 1917 and 1919, it is estimated that nearly one-half (9-11 million people) of the Persian population died of starvation or disease brought on by malnutrition. Those men fit enough to fight, took up active resistance against the British, who now controlled most of the region. This is all more or less verifiable history, although little known today.

In this book, Mohammad Gholi Majd argues that Persia was the greatest victim of World War One and also the victim of possibly the worst genocide of the twentieth century. The author based his research on the great famine in Iran on documents and reports of the US State Department archives as well as from news and information taken from newspapers printed in those years, especially the Ra’d and Iran newspapers in Persia. Majd quotes the American Charge d’Affaires in Tehran at the time, William Smith Murray, has having claimed that a third of Persia’s population died from a combination of famine and disease. He also used as sources the memoirs of the British officers and commanders who were present in Persia (Iran) during the World War I. The book reflects on the direct role that the interventionist British and Russian forces played in the famine and subsequent mortality in Iran during the World War I.

In large, Majd blames the British who, after the Bolshevik Revolution in 1917, were the controlling power in Persia. Local transportation was taken over by the British for the transport of war materials, isolating farmers from their customers inside Persia. At the same time, Majd claims that significant amounts of food were confiscated by the British to supply British troops both within Persia and in the region.

Majd’s conclusion is that, unknown to most, one of THE major genocides of the twentieth century occured in Persia during and immediately after WW1. In general, one can believe the approximate accuracy of his sources – there was a major famine and millions died – whether it was one third or one half of Persia’s population is purely an academic argument – deaths were literally in the millions and the impact on Persia was enormous. However, “genocide” assumes the deliberate and wilfull killing of large numbers of non-combatants. That the British would deliberately undertake this is not believable and in this, Majd’s argument is not credible, it’s more of an emotional response. Which is understandable – picture in your mind if a third to a half of the US population had died off in WW1 from famine which was made worse by a foreign occupation under the same basis as happened in Persia. What would your reaction be?

What is believable is that this happened, albiet not deliberately induced by the British. After all, much the same thing happened in India during WW2, were a major famine resulted in millions dying, whilst all the effort of the Indian Govt went into fighting WW2 rather than alleviating the famine. Again, not genocide, just a focus of effort on the war and the ignoring of the fate of millions of civilians who were at best, irrelvant to the war effort.

Overall, a good study of this little known piece of history but the conclusion that this was a genocidal campaign by the British is sadly erroneous. As with many of the author’s other books, an interesting and historically needed study is marred by an emotional approach and conclusion which really don’t gel with the actual facts. It wasn’t genocide, it was simply that the British focus was on the war and all else, including the fate of Persian peasants, was secondary. However, it’s still a sad state of affairs when the deaths of millions of people is no longer remembered outside of the country where these deaths occurred, if in fact they were ever really known outside of Persia.

They’re interesting studies on subjects that are little known outside of Iran, some harder to read than others, but overall and as a general assessment, they’re marred by a rather biased approach to the topics.

The article below is a short book review by the Azadmardan Bakhtiari website in Persian: