Entries
You are here: Home / Entries / Iran and the Persian Gulf / Protest to US Navy for Incorrect use of Terminology for the Persian Gu...

The letter below has been sent to the Honorable Robert M. Gates (Secretary of Defense, 1000 Defense Pentagon, Washington, D.C. 20301-1000). Kavehfarrokh.com was first informed of this matter by the Pasargard Heritage Foudnation.

This letter has been drafted to protest against the US Navy’s decision to rename the Persian Gulf by another historically and legally non-recognized name in its Official style guide . 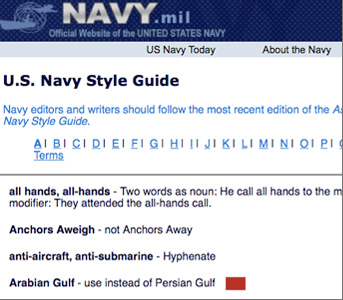 The “A” section of the US Navy Style Guide.

The “P” section of the US Navy Style Guide instructs that:

Persian Gulf – use Ar…n Gulf. “Gulf” is acceptable in second reference. Note: The Arabian Sea is its own body of water and should not be confused with references to the Ar….n Gulf.

Your decision is in direct violation of the directives and decisions of the United Nations. Kindly note the Editorial Directive (ST/CS/SER.A/29/Add.2) issued by the Office of the Secretariat of the United Nations on August 18, 1994 regarding UN Editorial Directive ST/CS-SER.A/29 – the scan of the original socument has been inserted in this document further below for your reference.

Attention is one again drawn to Editoral Directive ST/CS-SER.A/29 and Corr.1 and Add.1 on the use of the term “Persian Gulf”. The purpose of the present addendum is to urge that care be taken to ensure the appropriate use of this term in documents, publications and statements prepared by the Secretariat. The full term “Persian Gulf” should be used in every case instead of the shorter term “Gulf” , including in repetitions of the term after its initial use in a text. May I humbly ask why the US Navy directive has chosen to violate the UN Secretariat? Put simply, your directive or “Action Note”  is illegal in the strict international sense.

If the staff of the US Navy are hoping to pander to the pan-Arabist nationalist sentiments of the local Arab sheikdoms of the Persian Gulf states for political expediancy, then the following facts must be highlighted.

Below is a map of the Persian Gulf which was published bt the government of Saudi Arabia in 1955. The only reference to “Ar.. Gulf” is found with respect to the Red Sea of antiquity (e.g  see Herodotus’ “Histories”). Despite politicized attempts at re-writing history, the United Nations has twice recognized the legality of the term “Persian Gulf” (UNAD 311/March 5, 1971 and UNLA 45.8.2 (c) on August 10, 1984). It is significant that all Arab countries (including Iraq, Egypt and Abu Dhabi) have signed both of these documents.

The reasoning of the United Nations is simple: current political issues cannot be mobilized to re-write history. Such methods are reminscent of the historical revisionism of the Communists of the former Soviet Union who often revised history books and terminology to service short-term economic and political goals.

It is here where I would like to share with you my correspondence with the Honorable Russ Germain of the Canadian Broadcasting Corporation (CBC) in 2002. I had humbly noted to him of the correct historical designation and legality of the term Persian Gulf. I have attached the image of that e-mail for your reference below: Note the following excerpt from the above message from Russ Germain of the CBC:

“Often our wire services including Reuters, Associated Press and Canadian Press will use the term Ar…n Gulf…this does not necessarily make the name correct…but serves in large part to show the broad acceptance of a successful public relations campaign undertaken in the name of geopolitical interests.”

Another item of interest is the Medal issued by the US Navy for its servicemen and servicewomen in 1992 – this clearly identifies the name Persian Gulf: Medal issued by the US navy in 1992 – note the term “Persian Gulf” is clearly displayed. This was first reported by the Talkhnegar Blogspot.

The decision of your US Navy Office to resort to historical revisionism suggests the implication of political and economic motives. I am however fully confident that your distinguished service will steer tiself away from what Russ Germain describes as “”geopolitical interests“. On these important notes, I humbly invite you to adhere to the guidelines established by the United Nations and the international community.

Your attention to this matter is indeed appreciated.