Loris Tjeknavorian was born in 1937, in Iran, to an immigrant Armenian family. He lived most of his life in Austria, the USA, the UK, and Armenia. Tjeknavorian studied violin at the Tehran Conservatory of Music, before moving to Vienna to study at the Vienna Music Academy where, in 1961, he graduated with honors. Shortly upon graduation, a number of Tjeknavorian’s works were published by Doblinger Publishing in Vienna

Maaestro Loris Tjeknavorian is one of the world’s leading composers. For more information on the Maestro’s works consult his website here.

In 1963 Carl Orff granted him a scholarship, which allowed him to reside in Salzburg and to continue working on his opera “Rostam and Sohrab“, one of the major epics of Firdowsi’s Shahname, known as the “Iliad of Persia“. 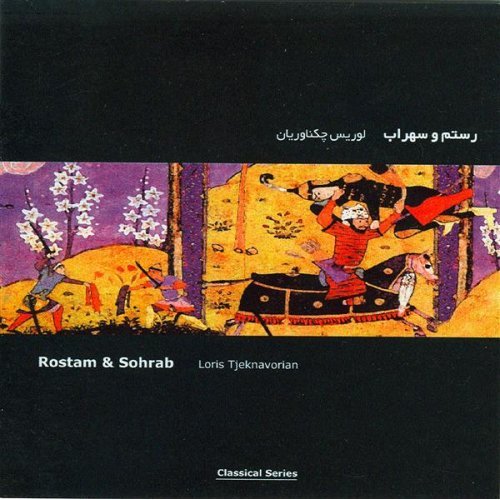 In 1965 Tjeknavorian began to study conducting at the University of Michigan. From 1966 to 1967 he was appointed composer in residence at the Concordia College in Moorhead, Minnesota, and from 1966 to 1970 head of the instrumental and opera departments at the Moorhead University in Minnesota. In 1975 Tjeknavorian signed an exclusive conducting contract with the RCA recording company and made many successful recordings with leading orchestras, such as the London Symphony Orchestra, the Royal Philharmonic Orchestra, the London Philharmonic Orchestra, etc.

Maestro Loris Tjeknavorian conducts his “Rostam and Sohrab” Opera in Tehran. The Opera video above (which features English subtitles) is towards the end of the performance which outlines the final tragedy of Sohrab’s funeral.

Iranian opera singer Darya Dadvar sings the tragedy of Rostam and Sohrab in Tehran. She currently resides in France.

In the course of his career, Tjeknavorian has made numerous recordings (with RCA, Philips, EMI, ASV, etc.) and written more than 70 compositions (symphonies, operas, a requiem, chamber music, concerto for piano, violin, guitar, cello and pipa (Chinese lute), ballet music, choral works and an oratorio, and over 40 film scores. His works have been performed by some of the world’s major orchestras (including the Vienna Symphony, the London Philharmonic, the American Symphony, etc.) and have received high critical acclaim. Among his many honors, Tjeknavorian was recently presented with the Austrian Presidential Gold Medal for Artistic Merit.