The Basilica di Massenzio also known as Basilica of Maxentius after Emperor Maxentius (r. 306-312 CE) who initiated the building of this structure sometime in 308-310 CE. This was a religious site whose construction began sometime in 308-310 CE. Maxentius’ successor,  Emperor Constantine (r. 312-337 CE) completed the Basilica, but changed some of his predecessors’ designs prior to the project’s completion. Nik Spatari of the Musee di Santa Barbera in Calabria, Southern Italy and his archaeological teams have conducted a four-decade study outlining the artistic and architectural links between the ancient Near East, Mesopotamia, Anatolia, Greece and Italy. Spatari has outlined the process of a long-standing Iranian Plateau-Anatolia-Mediterranean axis which has allowed for ingress of “Eastern” artistic-architectural influences upon Italy, especially through the southern Calabria region. The decades-long studies have unveiled several remarkable finds: one of these pertains to the  strong parallels between the Basilica di Massenzio and the palace of Ardashir I (r. 224-242 CE) at Firuzabad. A lecture slide used in instruction for Kaveh Farrokh’s lectures at the University of British Columbia’s Continuing Studies Division (this was also presented at Stanford University’s WAIS 2006 Critical World Problems Conference Presentations on July 30-31, 2006, the annual Tirgan event at Toronto (June, 2013) and at Yerevan State University’s Iranian Studies Department (November, 2013) (Slide is Copyright of University of British Columbia and Kaveh Farrokh). The above slide discusses the parallels discovered by Professor Nik Spatari with respect to the “tri-chamber” design at Firuzabad and the Basilica di Massenzio. The floor plan of Ardashir’s palace and the “tri-chamber” (note yellow arrows) were outlined by Spatari and the Calabria Research Team who noted of the parallels with the Basilica in Rome.

Ardashir’s palace features three domes built along with large walls, characteristics evident at Rome’s Basilica di Massenzio. However, it must be noted that the structure is not strictly “Sassanian” in the overall sense, and seems to be characteristic of the architecture of the Fars region in the early 3rd century CE. One notable feature at the site are possible resonances of an earlier Achaemenid architectural tradition. Although difficult to discern at present, the walls of Ardashir’s palace were originally covered with stucco, and evidence of this remains to this day in some places in some parts of the domed halls and court. The niches were formed of a cavetto cornice reminiscent of the lintels of windows and doors of the ancient Persepolis city-palace of the Achaemenids. This suggests that the architects of Firuzabad may have been aware of the more ancient Achaemenid architectural tradition. There appear to also be parallels with respect to the interior design at Ardashir’s palace and that of the Tachara palace at Persepolis. Ardashir’s palace was constructed near a small body of water along the banks of the western branch of the Tangab River. This was connected to a natural spring, thus suggesting that this may have been due to Ardashir’s (and the Sassanians in general) reverence for Anahita, the Iranian Goddess of fertility and the waters.  in connection with the Persian goddess of water and growth, Anahita. The waters also suggest a possible connection to Cyrus the Great’s ancient Persian gardens, as there appear to be some technical parallels to Cyrus’ Royal Gardens at ancient Pasargadae. Ardashir’s pond had tiles built along the sides which was surrounded by pavement construction. The balcony of Ardashir’s palace suggests a Parthian legacy as well, notably features evident at the Parthian palace of Ashur. Spatari has outlined the parallels between this Partho-Sassanian architectural feature in which rooms open onto an inner court much like Rome’s Basilica. While much attention has been paid by historians to the battles that took place between Imperial Rome and Partho-Sassanian Persia, the strong (yet understated) cultural and artistic-architectural ties suggest a more complex history of relations between these superpowers of the past. As Spatari has noted, the Near Eastern world, especially the pre-Islamic empires of ancient Persia (Achaemenid, Parthian and Sassanian) have exerted a profound influence upon the architectural traditions of Rome, especially through Calabria in the south of modern Italy. 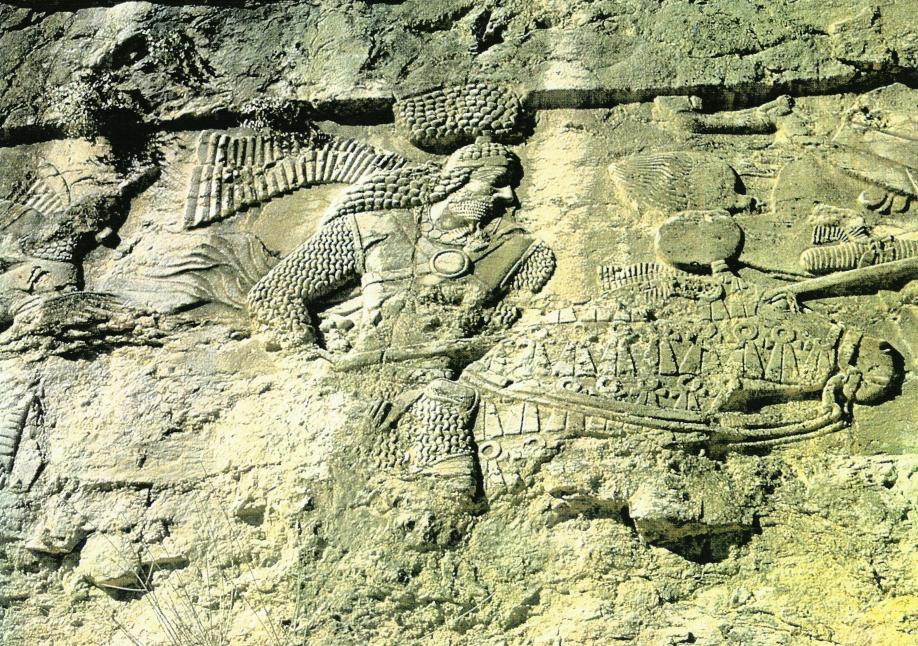 [Click to Enlarge] One of the understated contributors to the Western architectural tradition? Ardashir I (r. 224-242 CE) in a lance-joust scene at Firuzabad which commemorates the great battle in which the House of Sassan overthrew the Parthians in 224 CE. Note the large hair bundle (Korymbos) on top of Ardashir I’s head  (Picture source: Photo taken by Farrokh in August 2001 and shown in Kaveh Farrokh’s lectures at The University of British Columbia’s Continuing Studies Division , Stanford University’s WAIS 2006 Critical World Problems Conference Presentations on July 30-31, 2006).

Runes from Aknada in Daghestan
Scroll to top