The Persian Book Review Journal has evaluated Farrokh’s 2005 On-Line Book entitled: “Pan-Turanism takes aim at Azarbaijan“. The Review of the 2005 On-line book is available for download from Academia.edu. Arminius (Hermann) Vambery (1832-1913) seen above in eastern dress (left) and European attire (right) (Picture Sources: Public Domain). Vambery was a Hungarian professor, philologist and traveler working as an advisory to the Ottoman Sultan in 1857-1863. Vambery is one of the leading founders of pan-Turkism which is essentially a European invention. In a sense, it may be stated that the anti-Persian philosophy of pan-Turkism has never originated among the Turks – this was first created among European thinkers and through Russian support of anti-Persianism in the southern Caucasus in the 19th century.

Kindly note that the 2005 on-line book is being extensively updated and revised and will appear as a monograph with a different title under the guidance of Professor Garnik S. Asatrian (Chair, Iranian Studies Dept., Yerevan State University; Editor, “Iran and the Caucasus”, BRILL, Leiden-Boston) and Professor Victoria Arakelova (Associate Professor, Department of Iranian Studies, Yerevan State University; Associate Editor, “Iran and the Caucasus”, BRILL, Leiden). Below are excerpts of the review of the 2005 On-line text.

“...heavy investment has taken place among Western governments towards the study of domains pertaining to Iran with a large number of Think Tanks engaged in the research of the sociology, psychology, economics, politics, culture and history of Iran and utilizing these against Iran with respect to politics, diplomacy, and propaganda…a book named “Pan-Turanism Takes Aim at Azarbaijan” has been written by Kaveh Farrokh of the University of British Columbia in Canada and it is fortunate that this has been placed on-line on the internet. As far as can be ascertained, this book has not been translated into Persian, and it is incumbent upon translators to engage in this task. The writer of this book has engaged in the attention to a series of issues which are not paid attention to at the present time, but which could due to international circumstances transform into a major political crisis for Iran and profoundly impact upon the life of Iranians. This book considers a number of Western objectives towards Iran, especially with respect to the promotion of Democracy and Human Rights in Iran.” Ralph Peters’ version of the Bernard Lewis Plan (Professor Bernard Lewis denies being the originator of this plan). The above is a “revised” map of Iran and the Middle East as proposed by Ralph Peters (source: Peters, R. 2006. Blood Borders: How a better Middle East would Look. Armed Forces Journal, June Issue). Note that the Republic of Azarbaijan has absorbed Iran’s Azarbaijan province, a Greater Kurdistan has absorbed Iran’s Kurdish and Luri regions, Iran’s Khuzistan province has become joined to a southern Iraqi Arab state, Iran’s southeast is joined to a Greater Baluchistan. Interestingly, Peters has “compensated” Iran by “granting” it the city of Herat, which was in fact a part of historical Iran until its official detachment from the country by the British Empire in the late 1850s.

“Pan-Turkism, or in its broader sense, pan-Turanism, is a racist ideology akin to pan-Arabism, pan-Iranism, Fascism, Nazism which conveys the message that the culture and history of the Turks is superior to all other peoples in the world, with the aim of creating a Turkish state stretching from Europe to Asia… “ A map of the proposed pan-Turkic or pan-Turanian state (Picture Source: The apricity). Much of this philosophy can be traced to European thinkers such as Leon Cahun (see below). David Leon Cahun (1841-1900) proposed that the Turks were a superior race or more specifically “supermen” (Picture Source: Public Domain). The notion of racial superiority is an alien concept among the Turks who have always been (and remain) warm, open, friendly and hospitable to all who visit or settle in Turkey. Racism has never existed among Turks or Turkic-speakers – the importation of this concept can be traced to European thinkers such as Cahun who placed a heavy emphasis on drafting pan-Turkism as an anti-Slavic, anti-Islamic  and anti-Persianate philosophy.

“In summary this book provides a detailed description of pan-Turkism and how this is being sponsored by Western economic interests…the writer notes how this ideology claims that the founders of human culture, civilization and language are Turks and that the civilizations of Iran, Greece, Rome and Sumeria were founded by Turks. Tajiks, Kurds and native (North American Indians) are claimed as Turks.” Painting of the mythical Grey Wolf (Ashena) and what is presented as a Turkish Indian warrior (Picture Source: Network54). One of the assertions of Pan-Turkism is that the entire spectrum of the native Indian population of North America are essentially Turks as these crossed Asia into the North American continent along the Bering Strait. Turkic peoples however had not formed as an ethnic group tens of thousands of years ago and linguistic analyses fail to provide any correlations between any indigenous Indian languages in North America (which are highly diverse in their own right) and any Turkic languages.

it is important to note that in contrast to the current establishment in Baku (modern-day Republic of Azarbaijan known as Arran and the Khanates until 1918), many modern-day Turkish historians seriously question the premises of pan-Turkism and acknowledge its ideological nature. Turkish professor  Ayse Gül Altinay has summarized seven premises of pan-Turkism in her 2004 book: The Myth of the Military-Nation: Militarism, Gender, and Education in Turkey, Published by Palgrave-Macmillan, pages 22-23:

“In part II of the book, the writer engages in the description of pan-Turkist claims to [Iranian] Azerbaijan…being a part of Greater Turkestan. These claims are being mainly promoted by Western petroleum interests…The writer also engages in the examination of the false thesis that Azerbaijan was a large kingdom split between Iran and Russia during the Qajar era resulting in a “South Azerbaijan” and a “North Azerbaijan” which must be “re-united” like Vietnam…“ A post-Soviet era propaganda map produced in Baku. The above map (click on the above map to see the associated video) promotes the false notion that a “Greater Azerbaijan” was divided in two by Russia and Iran in 1828. Historically false claims such as these were first promoted by the pan-Turkists of the early 20th century which were then propagated by the former Soviet Union and the Communists, notably Joseph Stalin and Mirjaafar Baguirov. Unfortunately the legacy of historical amnesia has continued to persist at the official level in the South Caucasian state.

“...poets such as Shabestari, Ganjavi and Molavi were Turks who were forced to write in Persian…“ 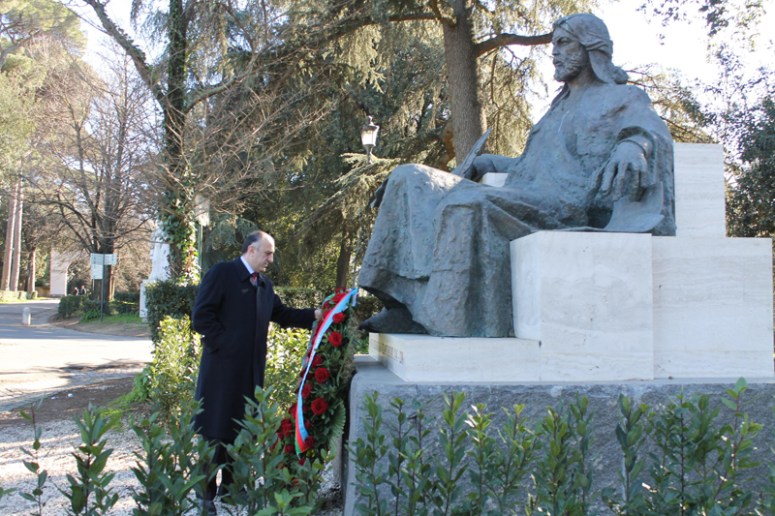 Baku Foreign Minister Elmar Mammadyarov at Nizami Ganjavi monument at Rome’s Villa Borghese park in early February 2013. The Aliev Foundation  funded the installation of this statue as part of the initiative of falsifying Iranian historical icons (see Petition to correct the historical identity of the statue in Rome). Ganjavi composed his poetry in Persian and wrote extensively on the Iranian cultural realm.

Saberi then notes of the writer’s use of primary sources to disprove such claims and demonstrate that Turkic languages are historically-speaking, relative newcomers to the region, beginning from the post-Islamic era in the 11th century CE. A Persian miniature made in 1546, during the reign of the Safavid dynasty of Iran (1501-1722). This artwork is of the Persian poem Guy-o Chawgân (“Ball and Polo-mallet”) depicting Iranian nobles engaged in the game of polo, which has been played in Iran for thousands of years (Picture Source: Public Domain). The Baku establishment initially attempted to convince UNESCO that Polo was part of the “Azerbaijani heritage”, however in a positive development, their authorities acknowledged the diverse historical legacy of the game lin 2013. The term “Azerbaijan” never existed in the South Caucasus until May 1918. The only historically attested Azerbaijan is in Iran’s northwest which has been a cultural and historical part of the Iranian realm for thousands of years.

Professor S. Peter Cowe: Church of Etchmiadzin (Ejmiatsin) Sassanians in the Persian Gulf according to Archaeological Data
Scroll to top